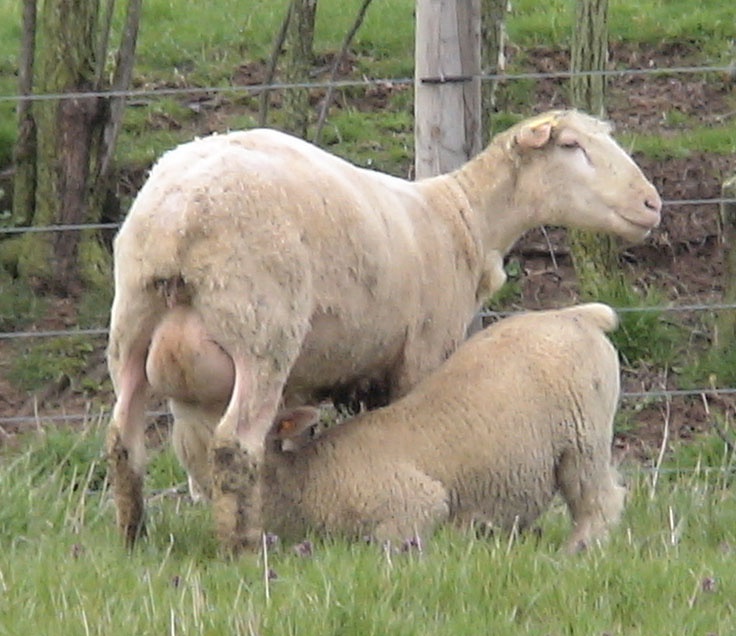 For the first year or two after purchasing our flock in 1997, we utilized locally-available Dorset rams. However, as we learned more about the different 'types' of Dorsets, we started to seek more 'production-style' Dorsets which were a challenge to locate, for while those flocks were out there, they weren't actively advertising, making them more difficult to find.

We signed up with LambPlan in 2001 and started utilizing Expected Breeding Values (EBV) in our genetic selection. While nearly all of the purchased sires brought something positive to our flock, none had EBVs, and the EBVs we developed when using them in our own flock showed that our homegrown rams we used were outperforming these purchased sires. This made it a gamble for us to go back to the same flocks for new sires- would they, or wouldn't they, continue to improve our flock?

In 2014 we switched our membership to the National Sheep Improvement Program (NSIP) as this program was now fully functioning, plus we had a number of rams in NSIP-enrolled flocks. This allowed us to have cross-flock EBVs rather than just the within-flock EBVs we had with Lambplan.

We started seeking genetics that had EBVs so we had solid production records. While there were a few Dorset flocks enrolled with NSIP at the time, many were not very similar to ours in phenotype or management. So we started looking outside the US for genetics that are selected using Best Linear Unbiased Prediction (BLUP) technology such as EBVs.

Since the Dorset breed originated in England, and Kathy had the opportunity to visit England, including some Dorset flocks, we decided that bringing in genetics from the 'motherland' of the Dorset breed was the way we wanted to go. We were fortunate to find a flock that was not only ranking at the top of Signet ranking (England's BLUP program), but also one of the most genetically connected flocks in England. We have imported semen twice, from three different sires, and have been very satisfied with the results. We hope to continue to import genetics from this flock barring political or financial obstacles.

In 2014 we were fortunate to have a Lambplan ram collected from a Dorset flock in Australia that was enrolled in Lambplan and heavily selecting for parasite resistance. The first offspring were born in March 2017 and we look forward to seeing how these genetics improve internal parasite resistance and carcass traits. In 2019, we AI'd some ewes to another AUS flock and look forward to those genetics.

In 2020, we are importing more British genetics to continue genetic improvement in our flock. The process has become much more difficult and expensive (due to long-term testing and quarantine required of the donor rams), but we hope to continue to do this on occasion, as long as the border stays open for importation.

See the pages in the navigation bar at the top of the page to see how we've been genetically selecting our sheep. Also see our FAQ page and our page on Buying Rams that provide further explanation on genetic selection utilizing EBVs.